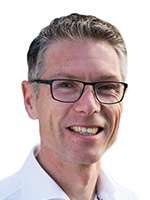 Casper Peeters is CEO of E-magy, a designer and manufacturer of “nano-sponge” silicon material for advanced Li-ion batteries. He also advises and invests in other fast-growing companies that make the world smarter and more sustainable.

Previously he was CEO of Xsens, a 3D motion tracking company which he co-founded. He led this company from inception in 2000 until after its acquisition by Silicon Valley icon Fairchild Semiconductor in 2014.

He holds a Master’s degree in Physics from University of Twente, The Netherlands.