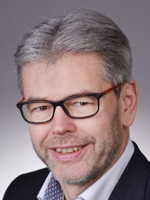 Dr. Frank Stubhan studied physics at the University of Ulm in Germany.

In 1995, he got his PhD Degree at the department of Surface Chemistry at the University of Ulm for his thesis about nucleation and growth mechanisms of diamond CVD thin films on silicon.

He started his professional career at Daimler AG, where he worked in materials research in the R&D division in Germany and China for more than 10 years. He was in charge to set up a joint venture between Daimler and the Chinese Academy of Sciences in Shanghai as general manager.

For centrotherm photovoltaics AG, he was in charge of setting up the business of polysilicon production equipment. As COO of Sitec GmbH, he was responsible for EPC projects of polysilicon plants worldwide.

Since April 2017, Frank Stubhan has been working with the ACI group, where he took over the role as CTO of ACI systems GmbH, in charge of project management of the lithium projects in South America.