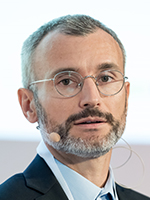 A graduate of the National Institute of Applied Sciences in Lyon (France), Jean-Denis CURT joined Renault in 2000 to support the environmental certification of the Curitiba plant in Brazil.

From 2007 through 2009 he acted as HSE project leader for the design and construction of the first zero effluent plant of the Renault-Nissan Alliance inaugurated in Chennai (India) in 2010, and the setting up of electric vehicle and battery assembly lines in Europe.

In 2010 he was appointed head of the unit in charge of Industrial Risks Prevention, Environmental Management and Energy Performance for Renault sites worldwide.

He has been acting as head of Groupe Renault’s Recycling & Circular Economy Unit since the end of 2017.