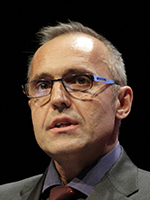 Digitalization and traceability challenges in the Li-ion Battery industry

Dr. Michel Popovic holds a Ph.D. in Electronics and has graduated as electronic engineer. He earned both degrees from the University of Clermont-Ferrand in France.

He moved to sales and management responsibilities following the foundation of IN-CORE Systèmes in 1998. In his current position, Michel is in charge of new and innovative inspection solutions for several industries.