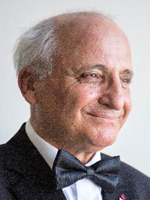 New strategies for LIB fast charging based on artificial intelligence

Prof. Rachid Yazami, is a native of Fez, Morocco and a graduate of the Grenoble Institute of Technology (INPG) electrochemistry and materials science where he also received a Ph.D. on graphite intercalation compounds for lithium battery application, and began his career and rose to research director at CNRS (Centre National de la Recherche Scientifique) in Grenoble. Recently, after over 40 years in academic research Prof. Yazami retired from the CNRS pursuing his career as entrepreur.

Yazami is the inventor involved in over 150 patents related to battery technology, including the graphite anode used in most commercial lithium ion batteries an over $100b business. Dr. Yazami co-authored about 250 articles in peer-reviewed journals, book chapters and international meeting proceedings.

Yazami served a visiting associate in Materials Science and in Chemistry at the California Institute of Technology (Caltech) in collaboration with JPL/NASA together with being the President of the International Battery Association (IBA). His name appears in International Scientific Board of several lithium battery conferences and events.

In recognition of his invention of the graphite anode in lithium ion batteries, Yazami received several scientific awards, including from NASA, NATO, IBA, JSPS, Hawaii Battery Conference, the IEEE and the Draper Prize in 2014 considered as the Nobel Prize in Engineering.

In 2014 Yazami was decorated by HM the King of Morocco. He is the recipient of the French Legion of Honor in 2016 and of the “2018’ Takreem Award” in Science and Technology Innovation, considered the Arab Scientist of the Year Award. Recently Prof. Rachid was the recipient of the 2019’ Arab Investor Award during a Forum held in the UNESCO headquarters in Paris together with the Mohamed Bin Rached Medal of Scientific Distinguishment of Life Achievement given by the Ruler of Dubai in 2020.