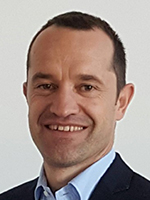 Ionic liquids-based electrolytes for next generation batteries and supercapacitors

Sébastien Fantini is R&D team leader at Solvionic. He received his PhD in Physical Chemistry from the University of Versailles in 2001 with a focus on supercapacitors electrolytes.

He has been working on several research projects in the field of electrochemistry and electrodeposition at the University of Limerick, Ireland (2001-2002) and at the CEA of Saclay, France.

He joined Solvionic in 2006 and has been working on the development of Ionic Liquid based products, with a strong focus on electrolytes for electrochemical devices. He is currently managing research collaborations and B2B relationships.